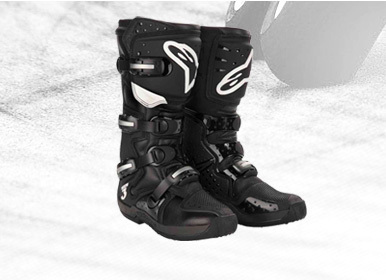 ONE GOAL, ONE VISION

"In 1963, a leather craftsman by the name of Sante Mazzarolo brought forth a future icon. Based in the small Northern Italy town of Asolo and with the perennial Alpine star flower as it's namesake, Mr. Mazzarolo began producing the first products bearing the Alpinestars moniker. At that time a new sport called motocross was establishing itself and becoming quite popular across Europe. Very much aware of the sport, Sante realized an opportunity to apply his talents and technical acumen to design a new type of footwear that would meet the protective needs and demands of this beautiful yet brutal form of athleticism. The revolutionary boot that Mr. Mazzarolo produced would become an archetype for motocross protection.

Early on, Alpinestars boots caught the attention of motocross legend Roger Decoster who became one of Alpinestars' first brand ambassadors and sponsored athletes.

Right from the outset, the company's vision and desire was to continually introduce innovative products that took performance to new and higher levels.

Thus a rich heritage in motorcycle racing was born, which would branch into road racing in the late seventies and eventually into nearly all discipline of motorsports from motocross to Formula 1. Though Alpinestars has evolved over the years, the timeless rebel-style of motorcycle racing and the refined Italian aesthetic of the early sixties continue to drive the brand.

Now, nearly 50 years later, Alpinestars has outfitted countless world champions past and present and produces the highest level of performance and protective footwear and apparel. To this day, Alpinestars' legacy of motorcycle racing and its roots in Italian artistry are stitched into every garment." -  Alpinestars